In order to get fast cycle times when direct drives are mounted vertically, or to prevent an axis from crashing down when the power is shut off, the intrinsic weight must be compensated for. Mechanical springs and pneumatic systems have been primarily been used up to now, but they have their disadvantages. In many cases a “magnetic spring” from MagSpring is a better solution. The great advantages of this solution include the fact that as a passive component it requires no power supply, is maintenance-free, and provides a constant force over its entire working stroke.

Machine tools and other systems with spring-based or pneumatic counterbalance systems on vertical axes constantly have problems, as comments in Internet forums demonstrate. The victims report axes that suddenly drop out, causing expensive damage to tools and machines. The causes given in the posts are incorrectly actuated axes, power losses, and problems with the counterbalancing system due to broken springs or leaking seals. The various counterbalancing systems can be differentiated by more than just their reliability, making them worth a closer look:

When electric linear motors or servomotors are used to perform vertical motions, they must apply a constant force both during the motion and when at rest in order to counteract the force of gravity. If a suitable system is used to compensate for this mass, the power required by the electric drive is reduced. As a rule, a positive side effect is that the drive can be smaller by design, with a corresponding positive effect on the power supply to be installed. In addition, a counterbalancing system allows the mass (such as the weight of the parts moving up and down on the Z-axis of a machine tool, including the tool holder and the tool) to be started and stopped more smoothly. The bearings are less severely loaded, there are no asymmetric loads when moving up and down, and last but not least the motions can be made more dynamic. In many cases, counterbalancing systems are also used to effectively prevent situations that are hazardous to the workpiece, machine, and operator due to suddenly falling axes. Currently, depending on the application, one of the following four principles will be used for counterbalancing:

Counterweight
For large machine tools, the weight is often balanced with counterweights that are connected to the moving machine parts via roller chains or cables. Given the trend toward compact form factors, however, there is often no room for counterweights and guides. The system is also susceptible to mechanical wear and therefore requires intensive maintenance. If the weight to be counterbalanced changes, then the system must be modified. For dynamic applications, this method is completely unsuitable, because the inertia is greatly increased when moving double the mass.

Mechanical Spring
The mechanical spring is a very inexpensive design element for providing weight compensation in vertical installations. The linear increase in force over the range of action of the spring, however, does not allow for ideal compensation of gravity over the entire stroke. Mechanical springs are also subject to relatively high wear. Spring packs, which are sometimes used as an alternative, do allow a constant force to be applied over a larger working range, and they minimize consequential damages if one spring breaks, but they are also expensive and require a lot of space. If the weight to be compensated for changes, then this type of system also requires modification. 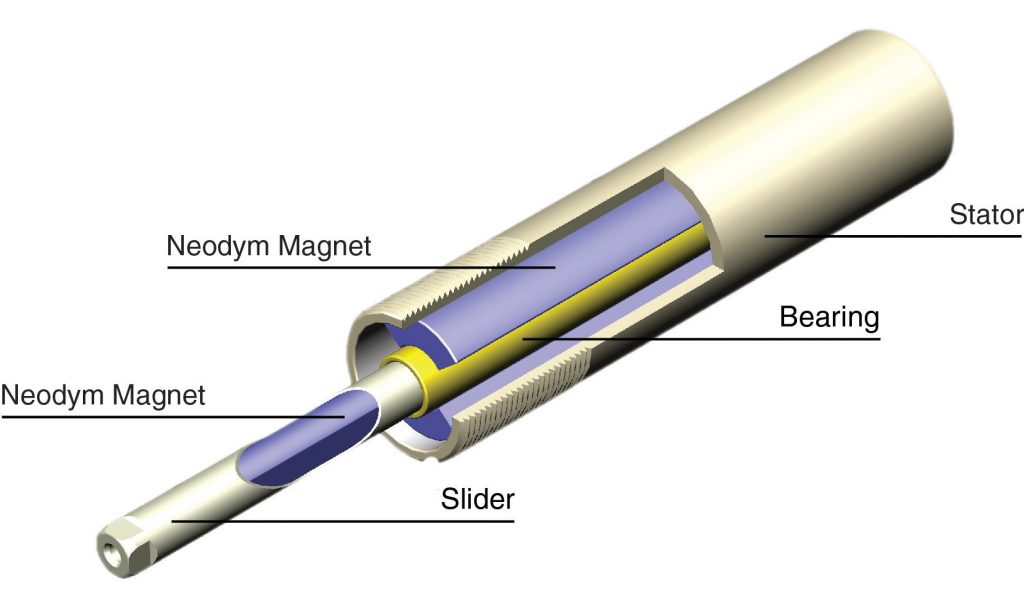 Pneumatic counterbalance
Unlike with mechanical springs, pneumatic cylinders can be used to produce constant and relatively high forces over a long stroke. This makes pneumatic cylinders a good compensation for the force of gravity, in principle. If an actuation valve is connected upstream of the cylinder, the force can be varied continuously and thereby react to changing weights. This does, however, require an additional controller. Because compressed air is one of the most expensive «energy media» in a production facility, the energy costs for pneumatic counterbalancing systems are significant and degrade the economic viability of the system. Compressed air systems are also frequently affected by leaks, which can cause the vertical axis to drop unexpectedly. Compressed air systems also require a lot of maintenance and can be used only in locations where an appropriate connection is available, which limits the mobility of machines and systems.

Magnetic Springs
The «magnetic spring» developed by the specialists for linear motors, LinMot, in contrast, uses magnetic repulsion to generate force, so it is maintenance-free and thus very reliable. The special design of the flux guides and magnets transforms the significantly non-linear relationship between force and distance for a magnet and iron into a constant force curve. Depending on the power class of the MagSpring, the permanent magnets are located either in the stator (iron, nickel-plated), in the slider, or in both components (Figure 2). The slider, made of chrome-nickel steel (1.4301), is supported by an integrated sliding bearing. This means that LinMot magnetic springs can be used in similar designs as pressurized gas springs, but have a significantly longer service life. Because MagSprings are passive components, they do not require a power source and can therefore also be used in safety-related applications without a problem. Because the force generated does not depend on the stroke travel, MagSprings are not just preferred for compensating for gravity forces in vertical drive arrangements. Thanks to their constant force/travel curves, magnetic springs can be used in a wide variety of applications, such as generating a constant press force regardless of orientation, applying a constant supporting force over a long stroke range, or single-sided force support in drive applications. As a passive element, MagSprings can also be used to hold or move a machine axis, or other components such as grippers or sliders, to a defined position when the power is cut off. 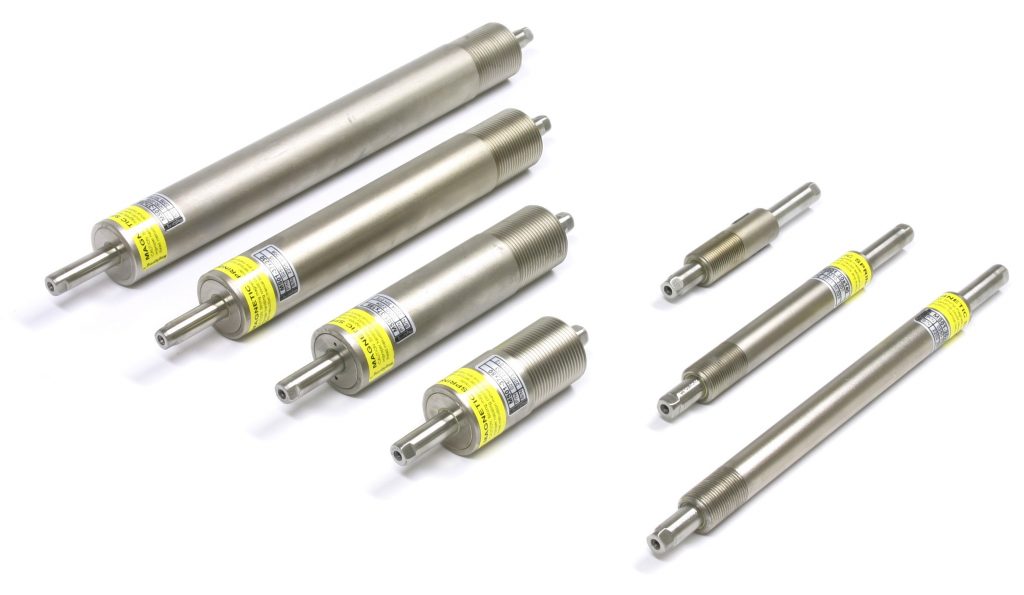 Working range of the magnetic spring

In the relaxed state, the slider is approximately centered in the stator, and the end of the slider that is designated as the working end sticks a bit further out of the stator. Fundamentally, however, both ends of the slider can be used to attach the load. Starting from this rest position, the slider can be pulled or pushed out of the stator in both directions. The force rises from zero to the nominal value in just a short distance. The working stroke then begins with a constant force. The starting position is defined as the distance between the working end of the slider and the end of the stator at the beginning of the constant force range. LinMot offers two series of standard MagSpring products for a force range of 11 to 22 N and a stroke of up to 290 mm, and 40 to 60 N with a stroke of up to 275 mm (Figure 3). An even stronger variant with a rated force of up to 120 N is in development and will be available in 2014. The effective force is within +/-5% of the rated force, due to material and manufacturing tolerances. Mounting flanges and adapters are available for installing the magnetic springs. With these accessories the MagSprings can be attached directly to the H01 linear guide or B01 bridge guide from the same company. Thanks to their small diameter of just 20 or 37 mm, the magnetic springs can also be used in areas where space is limited. 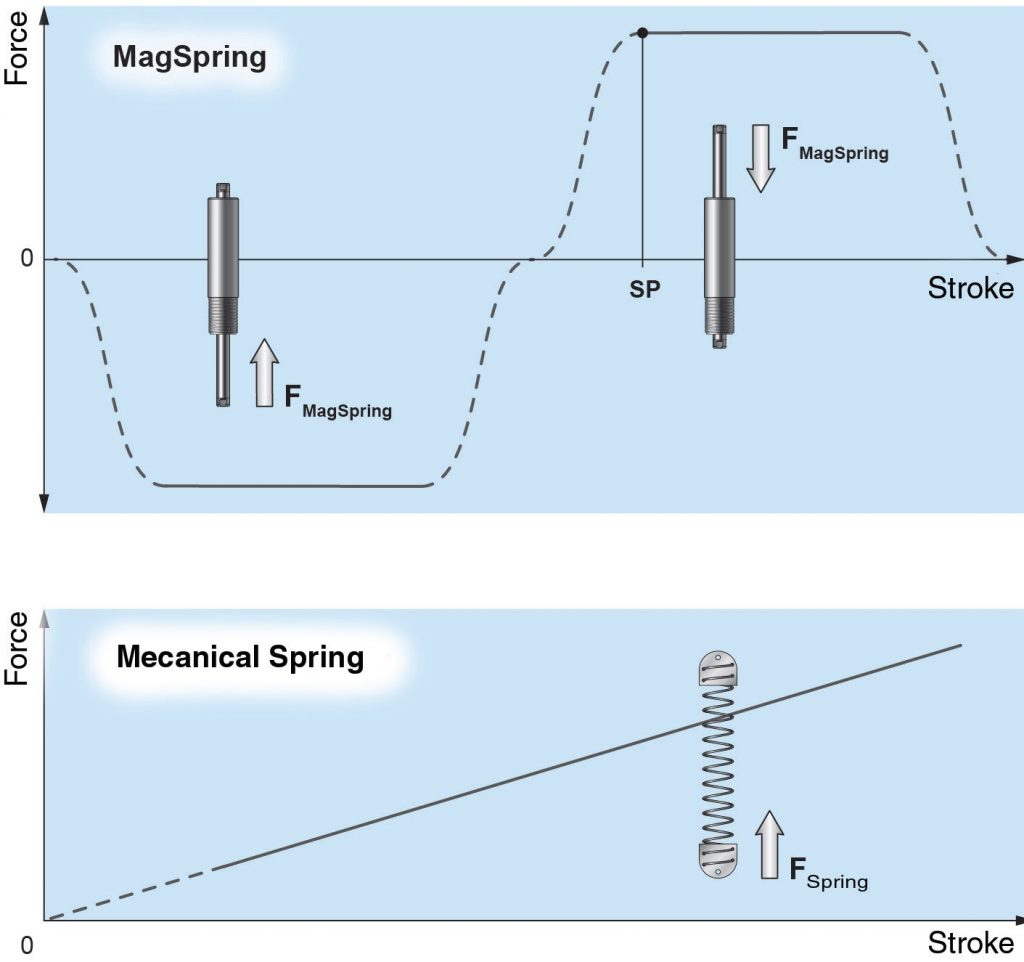 Unlike a mechanical spring, the MagSpring has a constant force over its entire working stroke (SP = starting point) (Grafic: LinMot)

A MagSpring can be used to passively compensate for the force of gravity in a vertically oriented axis driven by a servomotor or linear motor. The magnetic spring generates a constant force over its entire stroke range, regardless of position, speed, or mounting orientation. The motor then needs to supply only the dynamic forces, so it can react more quickly and be smaller in size. If the force of the MagSpring is selected to be greater than the weight of the load, then the load can be moved to a safe position if the power is cut off. MagSprings are also maintenance-free, resistant to wear, and take up very little space. Thanks to its nearly ideal properties, the magnetic spring is therefore superior to other counterbalancing systems (counterweight, mechanical springs, and pneumatic weight compensation) for many applications.

More about our magnetic springs

We are using Microsoft Teams for Videocalls